Gender-NeutralHood of the Traveling Glass 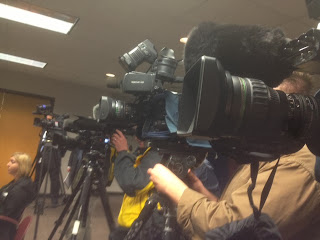 In the 'tog eat 'tog world of TV news, we often tend to forget who our real allies often are: THE COMPETITION.  Now... if reading that suddenly makes you want to squeal like a dog trying to pass a peach kernel, move on along.... Nothing to see here.

If you really get what I'm talking about, then read on.


How many of us have bum rushed and gangnam styled an interview?  Who has lent another photog some batteries when theirs die?  Anyone ever let another shooter borrow a bnc connector?  Ever asked the other guy if he's done with his big gulp because you need an acceptable place to displace some urine?  I bet everyone has seen an OMB struggling to get a stand up out of the way and offered to shoot it for them.  We've all held someone else's mic during an interview.  We've all shared some juicy info at a crime scene.  We've all told each other the exact location to get the money shot, & for better or worse, regardless who signs our paychecks, we watch out for each other.

This isn't a man's world, and it isn't a woman's world.  It's a gender neutral world of creative minds that often go under appreciated.  Not everyone eats, sleeps, and breathes news, but I will admit this:  I'm often guilty of visiting the competing stations websites at the end of a long day to see how they did the same story I did.  It provides unspoken insight into the photog that shot it.  Was it NAT heavy?  Did they use alot of foreground?  Was there a method to it, or was it thrown together?  It might seem contrite, but knowing just exactly who is standing next to you in the scrum is essential.  So take the time and introduce yourself.  Tell them your name and your background.  You might be surprised with the outcome... there's some pretty cool people out there that push glass for a living.

Heck, some of my best friends work at my professional competitors.