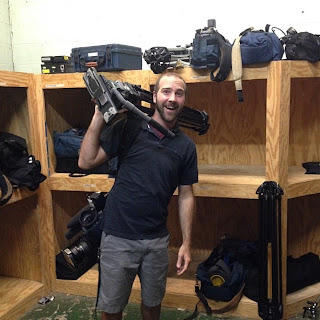 Every once in a while, someone in our business gets wise and crafts an exit strategy.

Few people do it with the grace and class that my fellow photographer, and dare I say good friend, Jason Paul.

Known affectionately around the newsroom as "JPaul", he's quite literally been the back bone of countless breaking news events, special projects shoots, discussions about the prowess of Apple Products, and more importantly... talks about life.


Jason Paul and I share a special bond, because whether or not he'll admit it, that guy was beyond excited that I got hired at our shop.  I was his way out.  I took over the weekend mornings for him.  I've since moved on to a different shift and passed that torch to another unfortunate soul.  I digress...

The point of all this bravado is this:  Jason Paul is getting out.... And he's leaving on the highest note he can: As a special projects go to guy, with a Monday through Friday 9 to 6 schedule.  He's leaving with his head held high.  He's taking his talents a few short blocks down Tryon Street to the Charlotte Chamber.... A place I'm certain he'll thrive in.  I'm also certain he'll bore some poor soul to death explaining why Apple is, was, and always be the superior technology to Windows, Android, Linux, plain old paper and pencil, and anything else that Apple has an edge on in the field of tech gadgets.

All joking aside, JPaul is one of those rare people we get the privilege of working with on occasion.  One of those people that makes you better at your job, because of who they are, and how they work.  One of those people that no matter how frustrated they might be on any given day, you'd never know it.  Dude knows how to bite his lip and press on for the greater good.... A lesson and work ethic he's imparted on me in the last several months.