DISCLAIMER: What you're about to read is totally my opinion and not the opinion of anyone else or my employer. 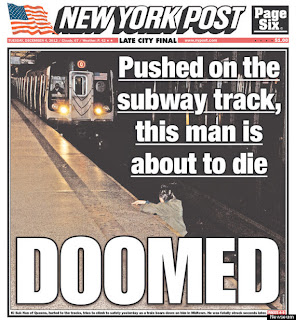 With that said, I'll skip my usual witty introduction and just cut to the chase.

The publication of this picture is a disgusting example of photojournalism gone incredibly wrong.

If you aren't familiar with the story and need to be brought up to speed, click here.

I'm not going to rant or rave in any direction over this, except to say this: whoever made the ultimate decision to run this photo needs to seriously reevaluate their position as a contributing member of society.

The photographer who took the photo claimed he was firing off his camera flash in an effort to alert the train conductor.  Here's an idea... drop the weapon and give the man a hand.  Pull him to safety perhaps!  The fact that this image was even captured is disturbing.

Being a human v.s. doing your job.  Getting the money shot v.s. witnessing someone die.  Capturing calamity or doing your part when no one better qualified is around to assist.  It's a grind that anyone who yields a camera for a living rides, and we all have our moments. 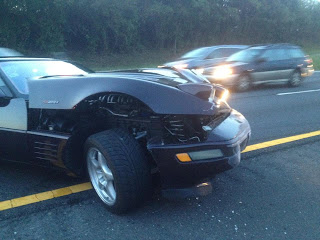 I had mine on September 22nd of this year when I was headed from one story to the next and came upon this smashed up Corvette on I77.  The guy had hit the concrete wall head on and was bleeding pretty profusely from his face and head.  No one was stopping to check on him and I did. And I waited with him until the EMTs arrived.

Now, at the risk of appearing like a totally self righteous jerk, I offer all of this in an effort to remind anyone who reads this blog, and pushes glass for a living, of one thing:  PEOPLE MATTER.  Never forget it.  Whether it was the publisher, editor, news director, or the actual photographer that chose to run that picture in the NYP, it's basically meaningless.  In my opinion, the guy should have dropped his weapon and organized the looky loos in a collective effort to pull that poor man from the tracks.  And now, publishing the horrific final moments of that guy's life is their burden.  They have to live with it.  I'm not sure if I could.

They could probably use a reminder that Saint Peter doesn't care about your resume, portfolio, or demo reel.
Posted by Dustin E. at 1:46 AM No comments: