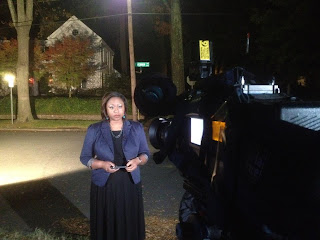 If you've been remotely following any of my social media rants within the last 2 weeks, you know that I temporarily had set up residence in the form of a live truck out side the Dilworth home of Paula Broadwell, the suspected mistress of General David Petraeus.

The first night was pretty effortless.  Cut a file video heavy package and make my way to her home for a live shot at 10 and 11.

Little did I know that my world would shift entirely after those couple hours spent on Mt. Vernon Ave.  It's a big story.  It's a talker.  A major player in a sex scandal was living in our own back yard.  Why not sign up indefinitely for it? 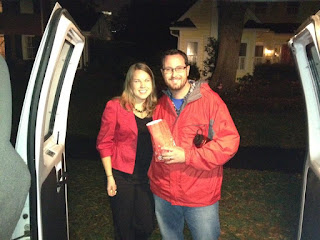 Why not indeed?  The following days spent covering this real life scene from Homeland would find me receiving gifts of popcorn from my smoking hot wife as I watched the drama unfold.

"If you're going to watch a soap opera, you might as well have a snack!" she said. 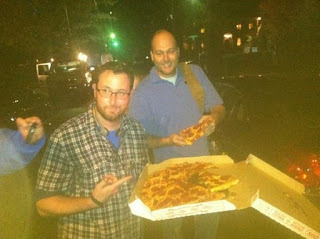 And snack I did.  On popcorn, nerds candy, and more turkey sandwiches than any man should be expected to consume.

I even scored some pizza that was the product of a poorly planned prank on the Broadwell house while the FBI was conducting a search of their home.


(Editors note: as of publishing this blog, the picture of me holding a pizza box has been viewed 37,336 times on the website Buzzfeed.)

What I didn't expect was the unhealthy obsession I had developed with this story.  After all the time I spent covering it, I had to get the money shot.  The 20 seconds many photogs know too well.  The one shot that makes all the time spent standing in the cold, using a styrofoam cup as your toilet, and aimless hours spent pulling cable and repositioning your lights to make the inevitable bump shot of the house look different than the previous 20, worth it. 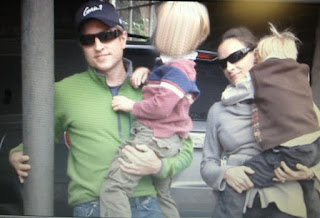 And get it, I did.  After countless hours waiting outside her drive way and pouncing on the first sign of life outside her white brick abode, we got the word from a family friend.

"The Broadwells will be home in the next 45 minutes or so. They know you're all here.  Just please be respectful..."

My 16 second clip of the Broadwells unloading their car and their children at their home was picked up by ABC World News, CNN Headline News, and a host of other country wide ABC affiliates that desperately wanted a glimpse at the woman who had spent the previous week in seclusion at her brother's home in Washington, DC. 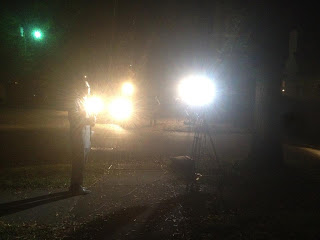 Her return home provided great fodder for any and all who yield a camera to provide for their families.

Myself included.  I racked up more overtime sitting outside this woman's house than I did during the Democratic National Convention that was recently held in our fair city.


To sum up the entire experience briefly, and in keeping with my mantra that people always matter more than anything else, that family needs time.  Time to heal.  Time to sort things out. Time to put their lives back together.

Being a B list celebutante one day, and then being thrust into the international spot light over a personal indiscretion the next, has got be jarring.  I'm not downplaying what it is that she's suspected of doing, but I honestly can't imagine what I would do if the tables were turned.  And that's a question I ask myself all the time.  If something traumatic happened to me and my family that the news gods deemed worthy of providing airtime to, what would I do if a total stranger approached my doorstep and asked me to talk about it?

I legitimately struggled with the amount and type of coverage this story was given.  But as my mentor Richard Adkins pointed out to me, most of the time if we show up at someone's house, there is a reason.

This theory is rooted in a quote from the movie "Gross Pointe Blank".

"If I show up at your door, chances are you did something to bring me there."

And she did supposedly do something.  Supposedly...

The burden of proof now lies on the shoulders of folks who aren't news photographers like myself, and I thank God for that.

I did my job, and I did it well.  I got the shot.  I spent over 80 hours on the sidewalk outside of her home.  I stood next to the spot where "Dad Loves Mom" is scrawled into the pavement by a pressure washer.  I've seen her husband drop an entire bag of groceries and consequently lose a bottle of good red wine, all because his hands were shaking so much at the sight of our media scrum waiting just feet away, he couldn't hold onto them.  I've seen the sincere shame in her face that is a product of being affiliated with this entire ordeal.

Some folks claim that she is remorseful and attempting to rebuild a foundation for her family and her marriage.  Assuming this is true, and I have no reason to believe it isn't... I applaud her.  Did she do some things she shouldn't have? Maybe.  Only time will tell.

However, if you're an advocate for marriage like myself, you cannot help but want for them to work out.  And I hope that once the dust settles, they will.

In the mean time, I'm sure my residency outside the Broadwell home is far from over.  I'm sure that anytime something breaks in this story, we'll be out there again, live from her front porch.

Sometimes that's just the grind you ride to keep lights on.  But it doesn't stop me from cheering for their marriage on the inside.
Posted by Dustin E. at 4:51 AM No comments:

A Different Kind of Thanks

I'm putting the mini drama of covering the Broadwell house that has become my life over the last 10 days aside, and saving it for a later post.  Today I'm talking Thanksgiving.

Most folks are probably making arrangements to travel and see their families and probably cooking something with the the suffix "casserole" tonight.  Not me.  I'm pulling my usual nightshift and bringing it in for a quick turn around to work 9am to 6pm tomorrow.  And for that, I am thankful.  Thankful for the opportunity to spend turkey day (or night) with my wife and to cook a perfectly portioned dinner for just the two of us.

Working in television isn't conducive to seeing your family on most holidays.  I'm working Thanksgiving, Christmas, and New Years this year.  It's not ideal, but it's the grind you ride in order to keep the lights on.  I'll see my family the weekend before Christmas, and my inlaws the weekend after New Years. I'm thankful for a family that understands the limitations that my chosen profession places on our time together.  If anything, it serves to make the moments we do get together, only more special.

I am thankful for friends that understand my job is much different than theirs, and that it might mean I'll miss your holiday cocktail party.  But it also means that when I do make it to the party, I'll have plenty of outrageous stories to keep the crowd entertained.

I'm thankful for the people I've met through the lens of my camera over the course of the last year.  For the former military man who pulled himself from the depths of addiction and rebuilt his life.  I'm thankful for the beautiful faces that dot the streets and mountains of a small town in Guatemala.

This year, I have met more people through the lens of a camera that inspire an uprising of hope in me, than ever before in my career.  Usually I go there to tell their story, and end up coming away changed for the better.

I am thankful for the most supportive wife that any man who pushes glass for a living could ask for.  Occasionally she has to ask me to put the weapon down, and remind me to actually experience what it is that I'm capturing.  You can't buy that kind of perspective.

I'm thankful that earlier in the week, our pastor Jim White , gave a message about using your vocation to reach people; to work in such a way that reflects the purpose of your life and to allow your work ethic to be a reflection of a higher calling.  I fall short at that one, but it's something to aspire to in the next year.

And in the world we live in, I'm thankful that I have a job.  A place to go each day and do something I truly love.  Do you love what you do?  Are you leveraging your time there as an investment in the people you meet?  Are you thankful for what you have?

I don't intend that to sound arrogant or pushy, but as a challenge extended to any and all who have made it this far into this blog posting.  I do so because it is my struggle.  It's one I experience every single day.  Some days I miss the mark, and on others, I feel like maybe I got it right.

Is not being with my family on holidays pleasant? No. Am I a consistent fountain of positivity? No.  Am I always thankful? No.  Thankfulness is a daily decision.  A choice I find myself having to make every time I wake up, and usually several times throughout the day.

If I can remember I am one of the lucky ones to have a job doing what I love, and remember that the people I meet while doing my job are the real treasure, then that's half the battle.

People matter.  People inspire thankfulness.  Be them family, friends, or complete strangers.
Posted by Dustin E. at 1:23 PM No comments: