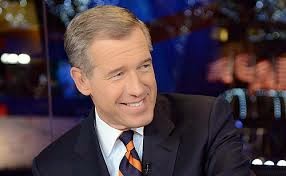 "My wife & children seem to like me quite a bit, and as long as that is true, I'm really OK."
-Brian Williams


I know it's been 161 days since my last post but indulge me for a moment, won't you?

You would have to be living under a rock to not have heard something about this debacle that B Dubs has found himself in. I still don't entirely understand all of the discrepancies that surround his story about the helicopter attack. I know that the long and short of it has to do with his claiming one thing happened, when in actuality, a totally different thing happened. And that's where his credibility bit the bullet.

The foundation of journalism is forged in credibility, trust, accountability, & accuracy. B Dubs has obviously been a little cavalier with his account of what took place in Iraq, and in doing so, has called himself into question over a number of other major events he has covered. And, at least for the time being, he's cost himself a job.

I can't help but wonder how this would have played out in a pre social media world. Twitter & Facebook ignited a fire storm of retweeting, sharing, and so on. It literally fueled the conversation. Suddenly the nation's most beloved news man had found himself as the lead story.

Brian Williams is a guy you like. He's a guy you want to like & believe the best in. And this situation is just sad.

The saddest part for me, as a fan of B Dubs and a former news shooter, is the way it's been responded to on social media.

It's easy to become a pious deputy of the journalistic morality police from the seat of a busted rolling chair in a windowless newsroom when you're taking a break from stacking your 30 minutes of infotainment to check Twitter & catch up on the latest crap you decide to read to distract yourself  from the fact that you're really questioning your chosen career path, isn't it?

Now let me be perfectly clear, I do not believe that all news people are the same. I believe that there are many more good eggs than there are bad. That said, I don't think you'll find a more cannibalistic tribe than some select members of the news industry.

To vent your frustrations over this blowout via social media is one thing. To comment about a man who made a mistake, albeit a life altering one, as if you've never, ever screwed up in your life or your career is disgusting.

Having recently become intimately familiar with screwing up, and also knowing all too well that this very blog I write is sometimes seen as a ride on my high horse, I freely admit that I'm just as guilty as every other news schmuck who decided to cast judgment on Mr. Williams.

My point is this: if you're going to publicly shame someone in 140 characters or less, at least check your own closet for skeletons before casting the first stone.