In  the world of television news, the highly coveted "dayside" shift of Monday - Friday, 9:30-6:30, is to a news photographer... what the sirens were to Odysseus.  It's a cruel temptress that always seems just out of reach.... 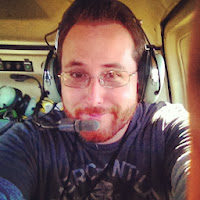 Well, not for this guy!  Today was my first Monday as a daywalker.  My new shift has finally kicked in.  I started my day by avoiding papercuts while sifting through this weekends' police reports, shot a quick vosot, and then loaded up into the chopper to head to a scene... but not before I snapped the uber popular "chopper selfie".

We headed out to Lincoln County and helped the sheriff's department locate a car that'd been sunken to the bottom of a fishing pond. 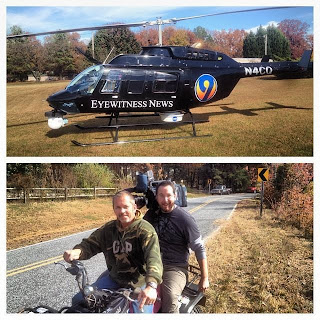 Chopper 9 pilot Andy Holt and myself then landed the bird in a nearby clearing behind a church.  The locals came out of the woodwork to catch a glimpse of the black beauty known as Chopper 9.

That's when I met my new friend Charlie.  "Hey camera guy! You wanna borrow my 4wheeler?"

Yes Charlie, I do.  You bet your sweet camouflage GAP hoodie wearing tail I do.  TAKE ME TO THE POND!

And off we went.  Our ground crew was already on scene and I really wish I'd snapped a pic of the other news crews as I arrived with my new chauffeur.

Charlie then dropped me off a few feet from the skids of the chopper and we spent the better part of a couple hours hovering over this pond while crews pulled the sunken vehicle out.  On the way back to Charlotte we hovered over a coal power plant that's closing soon, and then landed on the city pad.

I found my first day as a daywalker ending with me editing an anchor package on airline mergers, and then I had a moment I won't soon forget. 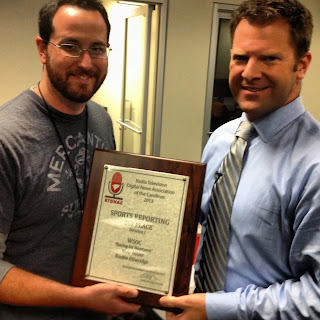 Earlier this year, anchor Blair Miller and myself began working on a story called "Racing For Newtown".

We were recently awarded 1st Place in Sports Reporting by the Radio Television Digital News Association of the Carolinas.  It's my first award as a photog in Charlotte.

Blair was kind enough to pause for a moment before the 5 oclock news to snap a picture of the plaque with me.

So I'll end with this: if the fruit of over 2 years of laboring odd shifts and working erratic hours means life on the other side is like this... I can handle that.  I'm beyond grateful and thankful to finally be on a shift that allows me to see my wife at night, have weekends free to visit family, and hopefully, become a little more even tempered.
Posted by Dustin E. at 10:33 PM